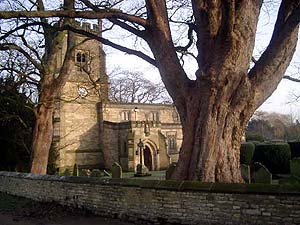 Slingsby began as a Danish settlement ‘Eslingesbi’ – the abode of Eslinc – and appears in the Domesday Book of 1086 as ‘Selungesbi’ having “a priest and fourteen carucates of land to be taxed”, a carucate being the amount of land that an eight-strong team of oxen could plough in a year (approximately 160 acres, or 65 hectares).

Although the Domesday Book recorded Slingsby’s priest, it is not until 1157 that there is any written evidence of a church building.  However, in 1157 a charter confirmed that the Lord of the Manor had ‘given’ the church to the Abbey of Whitby. In the 15th century the old church was heightened, and a tower was built.

In the early 19th century the chancel had to be rebuilt and by the 1800s further deterioration had occurred to such an extent that that complete demolition was necessary. In 1867 it was pulled down and rebuilt, taking two years. The cost of the rebuilding was  £5000 and was borne by Admiral Edward Howard, later Baron Lanerton.  It was said that “….no expense was spared to build and furnish in the best materials”.  The Baron’s grave just outside the porch is marked with a large Celtic-type cross.

Parts of the churchyard were designated as conservation areas in 1989 and it is carefully managed to encourage natural vegetation and wildlife. It is managed by a small group of volunteers.

There is an active Methodist Chapel in Slingsby and Church and Chapel work closely together across the year. There are also close links with Slingsby Community Primary with many of their special services taking place in the church.

While not on the village green, a number of different services take place there during the year with many ending in The Grapes Inn in the village. The church is located adjacent to the sports field and near the Slingsby Castle.

More details about community events in Slingsby can be found on the Slingsby Village website.

Detailed information on All Saints Slingsby can be found by clicking on the link (PDF document).