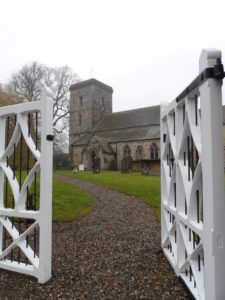 As with so many of the parish churches in England this church was built by the Victorians. In 1860 the nave, chancel and north aisle were pulled down, and the present church built at the expense of Marcus Worsley Esq. The memorial tablet stating his generosity may be seen in the south aisle.

The “rebuilding” was undertaken by Rhode Hawkins with considerable care: the ancient Saxon tower was left untouched; certain early features of the medieval church were built back into the new structure, which is itself entirely in 13th-century style and the lines of the original walls were exactly followed, with the addition of a south aisle to accommodate the increased population of the time. The present church is thus the same length as its predecessor, though its nave is now balanced by two aisles.

Despite this extensive rebuilding, this small church contains a wealth of interesting early historical material for which it is justly famous. Evidence of an early 10th century church, carefully preserved, can be seen in the form of a carved cross over the south belfry opening. It is a “wheel” cross, showing Danish or Scandinavian influence.

Set within the tower masonry is a stone carved with a cross in high relief. This is one of the oldest surviving Christian relics in Ryedale and could have been carved by the first Christians in this locality. With its four equal-length arms and flaring ends, it is the same kind of design as St. Cuthbert’s pectoral cross, preserved in Durham Cathedral. During the reign of Oswald, the Anglian King of Northumbria (633-642), Christian churches first began to be built in Yorkshire . Any church built at Hovingham at that time would have been destroyed by successive raids of Northmen and Danes. The later Saxon builders must have found this early relic lying round amongst the rubble and given it the place of honour above the main entrance to the church they again built on this long sacred site.

The chancel was re-ordered in 1981 as a gift from the Worsley family in memory of the 4th Baronet, Sir William Worsley and his wife Joyce. This re-ordering, designed by the architect Ronald Sims of York, constituted the most significant addition to the church since the rebuilding of 1860. The main effect of the re-ordering has been to create a fine sense of space, suitable for the performance of contemporary Eucharistic worship.

The most striking feature is the free-standing Viking Cross, now mounted high on its wrought-iron frame, and acting as the church’s altar cross. Originally, it would have stood high on a round column, possibly marking the open-air spot where Christian worship took place before the ruined church was rebuilt in late Saxon times. It was once brightly painted and fragments of a reddish limewash remain in crevices of the carving. When the church was rebuilt, this stone was built into the masonry of the tower where it remained until 1925 when it was removed and brought inside the church, where it was restored to a position of liturgical prominence.

The village is surrounded by the Hovingham Estate which has been in the ownership of the Worsley family for 450 years. There is a family mausoleum built in the churchyard on the north side of the church, which was constructed at about the same time as Hovingham Hall (c.1750).

There is a war memorial in the churchyard. 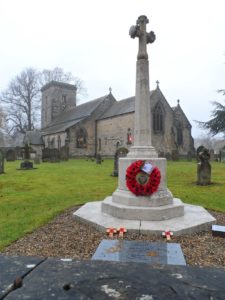 The village is popular with visitors and boasts a hotel, pub, bakery, café, shop and a busy village market on the first Saturday of the month which is run by the community.

While set a little off the main road, the church is located next to Hovingham Hall and can be easily found.

There are strong links between the church and the Methodist chapel in the village and the church is used occasionally by the Catholic church for services.

Hovingham Primary School is a Church of England school and has close links with the parish church.

Detailed information on All Saints Hovingham can be found by clicking on the link (PDF document).